The Strange, Wonderful Roads We Travel... 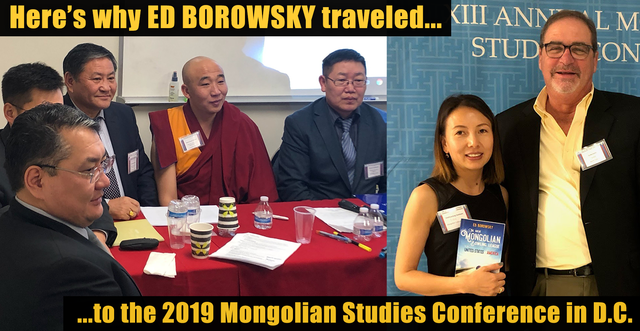 How many literary works by American novelists have "Mongolian" in the title? Not many but my recently published book happens to be one of them. I thus looked to the obvious route to promote my book, contacting via email the Executive Director of the American Center for Mongolian Studies.

The next day, I received an email from Jonathan Addleton, Executive Director. I was surprised to read that he already had discovered my book. He commented that he'd enjoyed the read immensely, and that between its humorous lines he found an ever-deeper meaning. He informed me that his organization, in their monthly publication, had reviewed the book and had distributed the review to approximately two thousand of its readers, consisting of academics, people in the foreign service, diplomats and experts in Mongolian studies.

He went onto say that he had included my book in a presentation he had made in Ulaanbaatar, the capital of Mongolia, to an audience of Mongolians. And after Ambassador Addleton had included my book cover in a PowerPoint presentation and after his talk, several Mongolians in the audience came up to him and asked where and how they could purchase it.

I was thrilled to hear all of this! Because I never have been to Mongolia, and at that point had only met one Mongolian in my life — a taxi driver in Chicago who told me the story of how he liked to bowl and ended up going to Orlando, Florida, for the first ever Mongolian-American bowling tournament in the United States of America.

U.S. Mongolia Relations—And What They Mean to Us

Ambassador Addelton has a fascinating background. An American citizen, he was born and raised of missionary parents in Pakistan. He worked in the foreign service, served in Afghanistan and was appointed Ambassador to Mongolia under the Obama administration.

In our conversation, I asked him why the people in the United States were not aware that in 1990 Mongolia declared Democracy from the Soviet Union, which toppled their society. Imagine going from an old Soviet-style state to democracy and capitalism almost overnight. Those who held jobs in communist factories were suddenly out of work and had to find new ways in which to make a living. The society was upended, but not for the determination of their people who had managed to make the transition at great cost to themselves.

I asked Ambassador Addelton this question: "Shouldn't the largest and greatest democracy in the world, The United States of America lend their support to a country of under three million people who chose their freedom at great peril?"

Economic aid, as well as technical assistance provided by the Soviet Union ended abruptly and as a result the country experience great challenges. Enterprises closed as foreign trade had broken down, while inflation skyrocketed. Food had to be rationed as the transition wreaked havoc on their lives.'

Mongolia is surrounded by two authoritarian countries, Russia to the north and China to the west, south and east. At any given moment, the Chinese or the Russians could have changed their minds and decided to take back Mongolia for whatever reason. After all, a vast amount of natural resources were discovered in the Gobi Desert after Mongolians declared their independence.

We in the United States of America live in a democracy that is, as of this writing, two-hundred and forty-three years old. We fought for our independence with coin and blood; given the state of the world today, it seems we need to continue to protect and fight for our freedoms, because our freedoms can be lost. We can never let our guard down.

Certainly, to have other democracies flourish in the world only strengthens our democracy, which continues to exist in this hostile world. Other countries would love to see America fail, as our very existence threatens their forms of totalitarian governments. The principles that American soldiers fought and died for make our society great, such as the will of the people, freedom of expression, freedom of religion, free and fair elections and the baseline agreement that all men are created equal.

How the Mongolian-American Community Welcomed Me In (It Was Kind of Like When the Great Mongolian Bowling League Adopted the Fictional Harold Kushner!)

Remember, Where Would the USA Be Without Legal Immigrants?

After spending a weekend in Washington, D.C., with my new Mongolian-American friends and American friends of Mongolia, I reflected on my own immigration story.  I feel blessed that I am second-generation American. My grandparents emigrated at great risk to themselves and they sacrificed as my parents did, so that I and my children could have the opportunity to live free and reach a level of freedom and prosperity that we could not have experienced anywhere else in this world. To the Mongolian-American community, we all should say:

"We're so glad you're here. Come knock on my door anytime if you need anything. I can't bake all of you an apple pie or bring it to your new home because you are twenty-eight thousand strong and I don't know how that would be possible. But I've realized that I will be with you, at the Fourth of July parade, celebrating our freedom together."

There's one more thing; I urge our government to support Mongolia in their quest to sustain the journey to democracy. I believe by bringing awareness to the American people through in-depth reporting on their fight for independence in 1990, we can help Mongolia thrive, thereby solidifying another democracy and capitalist system in our world.