Motivation & Writing: The Initial Spark that Captures the Writer's Imagination 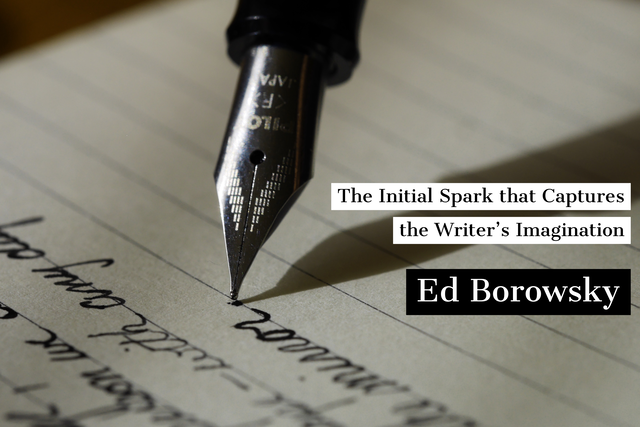 Synopsis: Here I discuss the relationship between motivation and writing, and describe the ways in which we can be ignited by the spark of a story idea (or, infected by its germ!). I also briefly touch on the reason why NaNoWriMo may not be your next step - yet.

In the month of November, authors are encouraged to sit down and set a goal of 50,000 words in a brave effort to write a novel in a month. There's a whole support group set up to assist the authors in their endeavor.

NaNoWriMo is a 501(c)(3) non-profit organization that according to their website "provides tools, structure, community, and encouragement to help people find their voices, achieve creative goals, and build new worlds – on and off the page."

The event has caught on, and I believe anything that inspires a writer to write is commendable. However, the intense writing practice doesn't quite work for me unless the writer has explored the story idea in his/her head and has meditated on it to the point that they've defined the four elements that make up the core idea of a story. I'll discuss how these elements relate to motivaiton and the writer's imagination in this and upcoming posts.

An author's idea for a story will emerge from daily life in one of two ways. At times, this idea ignites a spark within the writer's imagination, engulfing their being, only further fueled by the oxygenated breath of ink on paper. Other times, the idea infects a writer, an unnoticed germ, until one day the consequent symptoms beg prognosis of an imagination consumed.

As of this writing, I've completed three novels, two novellas, and a two-act play. I can say I've been both ignited and infected by story ideas. That is, the genesis of each work began by an incident that happened to me which triggered my curiosity. The only tangible difference was whether it was an immediate spark, or an infectious germ. When these incidents occurred, they nonetheless stayed with me to the point that I couldn't drop them from my thoughts. It's a process that is at times instant, others took years to develop before I sat down to write.

I find what sparks the writer fascinating. I'd love to hear when Ernest Hemmingway came up with the idea for Old Man and the Sea or what sparked Eric Segal to sit down and write "Love Story."

Therefore, to simply sit down and write from November 1st till the end of the month without this hashed out first, in my opinion, will be an effort in futility.

The writer has to feed their flame, to put their germ through the grist mill of thought, until he/she understands or defines what the "central idea" of the novel will be. Whatever the central idea is, it should raise a question that needs to be answered. This question should cause people to ponder; it should arouse curiosity; it will cause people to take sides; they will either root for or against the characters involved in the story. The central idea is what keeps the reader reading and the audience in its seat. The central idea needs to be defined, as it is the starting point for creating a story, and I'd suggest no words should be written until the author has this worked out. If you write prior to the central idea being defined, then the writing should be laid down only to help the writer in the meditation process.

This central idea rouses an emotion in the writer, one that the reader needs to feel in order to fully grasp this central idea. From this emotional conflict, characters arise; embodiments of the forces causing this emotion. These elements then shape the cruicibe in which they are contained. The initial spark that captures the writer's imagination; the germ which infects us.

The Four Elements of Writing a Story

"It has been said that any set rules are impossible to a writer, that novel and plays cannot be written by measure, that all one can do is have a "story to tell and tell it." But surely, it is better to tell your story so that the writer's meaning comes clearly to the reader/audience, and that it must first be clearly laid out in the author's mind."

They say there are two types of writers. First is the 'Outliner,' who carefully outlines and then writes their story. Second is the 'Intuitive Writer,' who discovers the story as they write, and as they discover so does the reader.

If I had to pick, I'm an intuitive writer. However, I'll argue that I always have a rough outline in my head. My stories change within the outline as I go, I just don't write it down. Behind all stories there remains four elements that both intuitive writers and outliners share. Without these four elements, there is no story - only process. This process is as follows:

The five stages of the writing process are self-explanatory.

There are, of course, many ways to create a novel or play. The creative process is complex, it begins, progresses, and evolves. With all the stories that have been laid down by generations of writers, there is a commonality of elements that make up a well-crafted novel and play. Once a writer gains an understanding of the four elements, they will begin to see them in every story, whether it be a movie they are watching or a novel they are reading. It is enlightening to the writer, however, it's not that easy at first.

This process is simple. Yet, it is only simply once you have that germ which infects us - the kindled spark igniting the writer's imagination into story, and the four elements of the construction of narrative.

The Four Elements of Writing a Story:

In upcoming posts, I elaborate how these elements relate to motivation and the spark of a writer's imagination.

Which type of writer are you? Also, are you more motivated as a writer by the spark of imagination, or do you find yourself consumed by forgotten germs? Comment below, I'd love to hear your take. 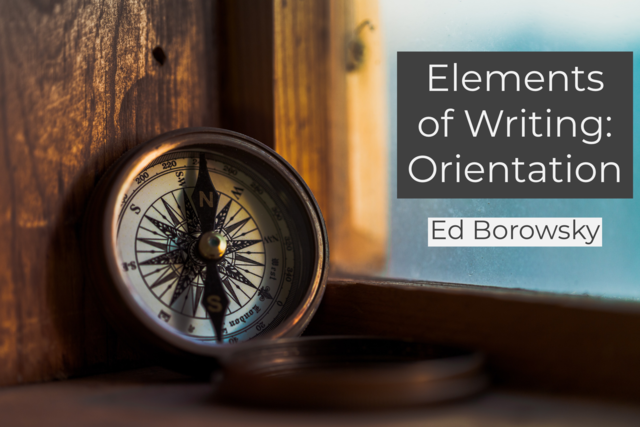 "Whatever the central idea, it should immediately raise an important question that needs to be answered. Well-crafted plays and novels raise important questions that the reader or audience wants answered. A question that will arouse curiosity, cause people to think, take sides, root for or against the characters involved in the action. The central idea is what keeps the reader reading and the audience in its seat. And most importantly, the writer should stay on track until the script is completed."

- Ken Eulo (Labyrinth of Design: A Causative Formula for Writers)

The central idea of a novel or play is its orientation; the initial 'spark' that instantly captured the writer's imagination, the 'germ' infecting slowly within. Without a central idea, a writer will not be able to stay on course and will eventually go astray. Most won't be able to finish their manuscript, or they'll wander or run amok.

It's the idea that gets them in the chair to write their story. Writers are encouraged to carry a notebook with them at all times. The greatest use of a notebook is when a spark occurs. Many ideas have been lost to time because they were not written down. The idea can be revisited in the evolution process that occurs in the meditation stage of a story idea. Like a chrysalis, the story idea will potentially morph to become the writer's next story to tell.

Story ideas sometimes come slowly or at times they hit the writer like an explosion. Many times, I've found myself in the heat of an idea, become passionate to the point that I'm compelled to sit down and just write like hell. However, as I've become more experienced in my writing, I've become more thoughtful in the writing process. Heated inspiration often blocks out cool logic. A writer must put knowledge before passion. This means that a writer must slow down and take a "good hard look" at what is compelling the writer to write that particular story in the first place.

The first and most important element in the construction of a story is orientation, however, it is the least understood. Most writers believe orientation is theme, but this is secondary. Orientation is the starting point, it's the constant guide that will keep the writer on track. How many manuscripts are sitting in drawers, unfinished because the writer lost their way and got confused to what they were writing about in the first place?

Orientation can be derived from a phrase, an aphorism, a title, problem, or perhaps a combination of different ideas that come together to form another new idea. Orientation must raise an important question or reveal an inherent problem. It's a question or problem that is provocative and will compel the audience/reader to stick around for the answer or solution.

Once the writer understands what the orientation of his/her story is, orientation will provide the writer clarity to what he/she is writing. It's something that a writer will explore from the beginning to the end of their manuscript. The audience will be with the writer as they explore and discover together.

Aphorisms can be good orientations. Aphorism, according to yourdictionary.com, is a statement of truth or opinion expressed in a concise and witty manner. The term is often applied to philosophical, moral, and literary principles. To qualify for an aphorism, it is necessary for a statement to contain truth revealed in a terse manner.

Two examples of aphorisms that can be used are "if it ain't broke don't fix it" or "An apple a day keeps the doctor away." If a writer used the apple aphorism as the orientation for their story, the author will be compelled in their writing to prove or disprove that an apple a day really does or does not keep the doctor away. There are so many different directions the writer can take from this statement that I ask you to use your imagination on how you would explore this statement.

Often times I've heard or have been told, "That's good writing." I understand that the reader is not merely saying that my words or sentences were well structured, rather the way I tackled the orientation of the story was interesting and enlightening to the reader.

Below I've listed my orientations for the books and play I've written to date:

Orientation: If you lived 50 years and had an unhappy miserable life, and you had the opportunity to erase your memory and begin anew, would you?

The Neighborhood (A horror novel)

Orientation: Can a man ever outrun his sins of youth in hell.

It's a Good Day to Liquidate (A thriller, novel)

Orientation: Can a man who has failed at everything in life find success in failing?

Lizard of Transition (A war story)

Orientation: God commanded us, "Thou shalt not kill/murder." Can a soldier who returns from war after he has murdered find redemption after living a good and seemingly fulfilled life?

The Great Mongolian of the United States of America (A comedy)

Orientation: "Can one live a simple life in a small town, work a small job, live without a family, and find meaning and fulfillment in living?"

If you'd like to learn even more about Orientation, I've discussed the orientations for several of my works in more detail:

What are examples of Orientation in your own work? Comment below, I'd love to read about it. If you'd like, continue reading about the other elements of constructing a story.