Fiction Mirror Reality: Pieces of You in Every Book 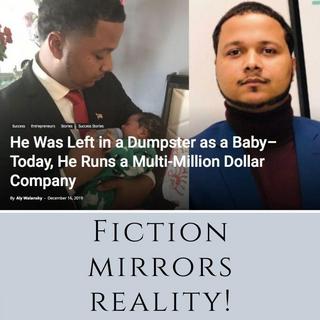 My mother used to tell me that I was a writer at a young age and of course I never listened. The only other time I did listen is when she "Found the right girl for me." Yes, she introduced me to my wife of thirty-four years poolside at her condo in Altamonte Springs, Fl. We went on a date and the rest as they say, "Is history."

I've wondered if at thirty I could have written like I do now, but quite frankly, I'm not sure I've had enough "life experience or maturity," to write about at a younger age.   I marvel at how younger author's have the insite on what to write at this stage in their lives, however I'm sure they'll gain more depth and material as they go through life.

My first book, "It's a Good Day to Liquidate," was based on a twenty-five years in the Furniture Liquidation Business. The book hasn't been released at this writing however, although fiction, many of the scenes or stories are things that actually happened to me. In fact, the descriptions of the business are all true such as, how a failing retailer feels and experience's when faced with being forced to liquidate their business? I've addressed the legal challenges that face professional liquidators that work against them, what the day of the opening of a liquidation sale feels like, etc.

The murders are something I've never personally experienced, but the forty-one-foot Hatteris that they used to flee the crime scene I was familiar with. I spent my first two summers in college working at a marina in Ocean City, MD. I've since been an active boater for most of my life. There's a scene with a Sicilian/Mafia pizza shop owner operating in a small town which mirrors my life. How my father dealt with him when he walked into our family's furniture store asking him to furnish his daughters apartment as a wedding gift from her mafia hitman father.

Lizard of Transition, my second book, not released yet, came to me one morning when I walked into my father's hospice room. He was hallucinating, talking to people on the other side. When he awoke, hours later, he told me he had a "vivid dream." He was back in the jungles of New Guinea, a young soldier serving in World War 2. My father died, a week later.

I met a young hospice nurse who was taking care of my father, who told me how she was called by God to serve. Her answer - her eleven-year old daughter came down with cancer and died. She was a beautiful young woman who had the weight of the world on her shoulders, however, that incident led her to her calling. I've found that many who work in that profession have had something tragic  happen in their lives, which called them to serve individuals who are in the transition from life to death.

Sprinkled throughout the piece are small stories that were told to me by my mother and father during their lifetimes. After the war my father suffered from recurring malaria and as a result, he couldn't work for three years after returning home. He also experienced a recurring nightmare throughout his lifetime, which the protagonist father experienced in detail in a scene in the book. There are many of his stories intermixed throughout, although the book is fiction.

The Amazing Life of Art Lemon begins with a premature baby being discovered in a dumpster behind the Wal-Mart store. Members of the "truck-crew," heard cries emanating from the large green bin as they took a smoke out back. The baby had one word pinned to his diaper, that read, "Trash." I worked on the truck-crew in high-school at Giant Foods in central Pennsylvania a long time ago.

Several of my beta readers had commented on how well researched the book is as it's set in the world of RC airplanes. I've been into the hobby for fifteen years now. I've built models from scratch and I'm an advanced flyer.

When the characters grow older and the protagonist get recruited at eighteen years old to work with the CIA and DARPA, I've based my experience in the military from Google and a fine-tuned imagination. The scenes overseas, working in the military, I had checked out by friends and acquaintances who actually served in in Iraq and Afghanistan. I passed the accuracy test, although I did have to modify some of the events to comply with reality after my real-life soldiers who were there corrected me.

I just finished my first horror book. I never thought I had it in me, horror that is. I'm very satisfied how it turned out. I believe it's going to be a hit once released because of the fact that my wife can't and won't read it. It "creeps her out." That's good enough for me!


The protagonist also spent a lifetime in the "consulting industry," helping business owners "Who can't see the forest through the trees," survive and thrive. Of course, in a way that's what I did for many years.

I also speak to the problems the Catholic Church have had with pedophile priests. I've always wanted to make the point that if the public actually saw the horrible acts that the predator does to our children they wouldn't hesitate to take the offender out back and put a bullet in their head. I won't give it away, but one of our protagonist neighbors likes children.

And the books sprinkled with stories of incidents that happen in the neighborhood. Most of the so-called fictitious incidents I've actually experienced with neighbors throughout my lifetime.  When placed in the setting of a horror story, those true to life experiences resonates.

As they say "fiction mirrors reality."

To those young writers, my hats off to you. Many writers have to work at other jobs to support themselves and their families. When do you find the time to write? You have to have a passion to continue to write after the day is done. In fact, I met one young writer who was complaining that at nighttime he would go into his master bedroom closet, sit on the floor with a light and a laptop computer to find the solitude he needed to put words on a page. What he doesn't realize, he's gaining life experience in that act alone. When he gets a little older perhaps he'll place a scene in a future book of a young man writing in a dark closet. The more life experiences one gains by living offers the young writer a plethora of material for their future works. Older writers have an advantage in that regard.