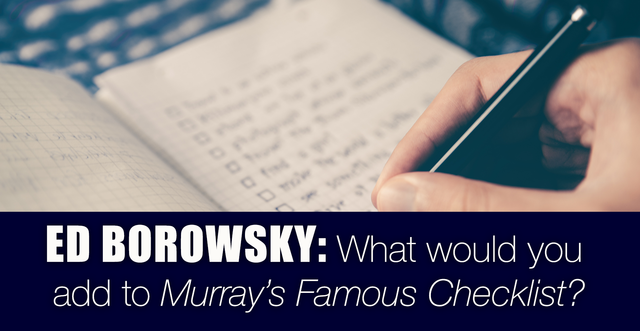 In the story of the Great Mongolian Bowling League, Murray Schwartz, the protagonist Harold Kushner's best friend and roommate of 30 years, is a mechanical genius. He can fix anything and is always looking for ways to make his fortune on his next best invention that will change the world. Like many very smart people, Murray sees life from a different perspective. However, at times he has difficulty tying his own shoelaces.

Murray and Harold are two single men, living together for all of those years, helping each other navigate through life. Like a married couple, they take care of each other and travel through life hand-in-hand in a masculine way.

One of Murray's inventions is what he calls "Murray's Famous Checklist." It's a preprinted list that he developed out of a need to control his environment, and to help ensure he doesn't forget to pack anything whenever he goes away on a trip.

Doesn't All Fiction have its Roots in Real Life?

I traveled on business across the nation for over twenty-five years, so I can tell you one tale after the other when I forgot to pack something. Like the time I went to Dallas from Hartford for a very important sales meeting scheduled for the next morning. I left in the afternoon and arrived in Dallas late that evening. I packed my expensive Canali Blue Suit, pressed nice dress shirt, a tie that cost me $150… you get the picture. When I arrived in my hotel room and unpacked my suitcase, I realized I forgot to pack my dress shoes. My meeting was scheduled for 10 a.m. the next morning. There was a high-end strip mall near my hotel so I called the prospect the next morning and told him I'd arrive a little late. They opened at 10 a.m., and I figured I'd go in to buy a pair of shoes, and then head to my appointment that was only fifteen minutes from the mall. Well, lo and behold, there was only one shoe store that had dress shoes — but they were very expensive. I had no choice but to choose because I was running out of time for this important meeting. I ended up purchasing Bruno Maglis, the only pair that would fit me in the shop, for almost $500. The shoes were very comfortable, but not my taste. I believe I wore those shoes twice, and years later sold them at a yard sale for $20…

So, where did I get the idea for "Murray's Famous Checklist?" I have a good friend named Bob (last name withheld to protect his privacy) who is a sales rep in New England.  Bob developed, "Bob's Famous Checklist." Over the years, Bob had figured out what he needed when he traveled, and listed the items on a pre-printed form. He would lay out his suitcase sometimes weeks before a trip and as he loaded up, he'd check off the box next to the item listed. Bob never forgot anything. Oh, and did I mention that Bob also has a degree in Nuclear Engineering?

Bob grew up poor, and has told me stories of his childhood when at times he went without. Sometimes these childhood memories get seared into our brains; Bob has never forgotten those times. I'm happy to report that Bob has become very successful and doesn't want for anything at this stage in his life, but old habits are hard to break. Bob still heads to the metal shelves at the back of the closeout store for his favorite expensive coffee that comes from a rainforest in Africa. "What a score on coffee," he always says.

I firmly believe that by combining a self with a character, a writer brings what feels like another person into the world, even if only for a moment. Every writer seems to leave a bit of his or her life in every character he/she creates. Harold's friend Murray in some ways parallels my good friend Bob.

When reading, one can wonder if the author's writing is art imitating life.

…And then there was the time I was traveling to Memphis. When we arrived, I got up and noticed that I forgot to put the cap on a pen, and the felt tip left a black ink circle about three inches round on the bottom of my shirt pocket. Then, I walked off the airplane and the heel of one of my shoes fell off. I should have packed an extra shirt and an extra pair of shoes. Thank God for department stores and credit cards. Boy, did I hate to pay top retail prices during those times of forgetfulness and desperation. If I had checked off "Bob's or Murray's Famous Checklist," I would have been in much better shape.

What items would you add to Murray's Famous Checklist? If it's not on there already, I'll be sure to add it. Leave your item in the Comments Section below so we all remember it on our next trip.