I Stood at the Intersection of Soul-Searching + Fiction Writing... That's How I Came About "The Great Mongolian Bowling League" 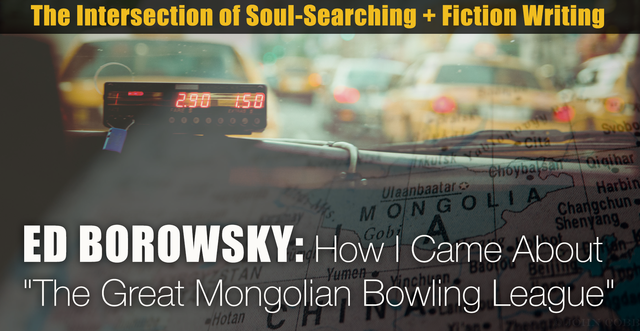 Many people ask me how on earth I came up with the idea of The Great Mongolian Bowling League of the United States of America. Here's the story behind the story—including why it's really a spiritual novel that "strikes" the heart with profound reflections on the meaning of life.

At the end of a business trip a few years ago, I called a taxi to take me to Chicago O'Hare airport. When I got into the taxi, the Asian taxi driver asked where I was headed.

I replied, "Home to Orlando."

"I'm going to Orlando next month," he offered.

"Are you going to Disney?"

I then asked him, "Where are you from?"

"I've never met a Mongolian/American before." I then asked him the logical question, "Is bowling big in Mongolia?"

After a brief silence, the taxi driver continued, "I found out that the AMF bowling alleys in Chicago—on Thursday evenings between the hours of 9 p.m. and midnight—were offering 25-cent games, 25-cent bowling shoe rentals and 25-cent hot dogs in a promotion they called 'Quarter-mania.'"

He explained that many Mongolian citizens arrive in the United States as poor immigrants and he was no exception. The promotion gave him the opportunity to have a fun night out with friends. He said, "We had a ball on the cheap!"

He then went on to tell me that he had nine taxis, but he had received a college degree in Finance and Economics from St. Petersburg University in Russia.

That's when I asked him a numbers question. "How many people are going to the bowling tournament in Orlando?"

Perhaps I heard wrong, because I visited the AMF bowling alley in Kissimmee, Florida, about six months after my encounter with the taxi driver. I met with the manager of the lanes who told me there had been such a tournament and she didn't believe there were more than 600 bowlers. In fact, her records showed that it was closer to 50 to 60. Still, assuming participants had attended with family members, I'm sure the numbers were quite substantial for the first Mongolian-American Bowling tournament in the United States of America!

And that was the germ that I meditated on for almost two years. I knew nothing about Mongolia other than its people had been ruled by a fierce leader named Genghis Khan, who at one time controlled a vast empire.

As I delved into my new research project, I learned that in 1990 Mongolia broke away from the Soviet Union and in a silent revolution embraced democracy at great risk. The economic transition was difficult for the Mongolian people, as they went abruptly from a broken down communist state to a modern democracy. People had to find a way to make living and many suffered in ways that the American people would find difficult to imagine.

Another intriguing fact was that sometime after 1990 they discovered that the Gobi Desert held a vast trove of natural resources like copper, coal and gold. This rich find had people saying that it could comprise one-third of Mongolia's GDP. Some were calling Mongolia, "Minegolia" now. In fact some of the first Mongolians to immigrate came to study at the University of Mines in Colorado. A fundamental problem Mongolia has been facing since the discovery is finding a way to build the infrastructure that could extract and refine those natural resources. The investment needed is beyond the scope of their government. They've tried to rely on foreign investments by individuals, corporations and friendly governments, but the problem hasn't been solved as of this writing.

Today there are a little over 20,000 Mongolian-Americans. They've settled mainly in Los Angeles, Chicago, Denver and Northern Virginia.

As a novelist, I sat down and tried to write the story several times, but I couldn't move forward because, quite frankly I didn't know any Mongolians. Until one morning when I awoke at around 5 a.m. I found myself in that transitional state between sleep and wakefulness when the thought popped into my head. I realized I could write this story from the perspective of a 72-year-old Jewish guy! When I sat down that morning, the first chapter poured out. The book flowed from there and my first draft was completed in approximately 3 to 4 months. I wrote the manuscript, week-to-week, in a stream of consciousness to its completion.

They say writers either hide or reveal themselves in their writing. I guess I'm very much like the protagonist, Harold Kushner, a man seeking answers to the soul-searching questions we all ask as we get older: "Did I live a good life? Did my life have meaning? Was I a good person?"

In the end, everyone must answer this question for themselves. My prayer is that experiencing the first—and perhaps only—Great Mongolian Bowling Tournament of the United States of America through the fictional Harold Kushner's eyes will bring you closer to your answer.